In-person Worship Service is held each Sunday morning at 11:00. Sunday school is held at 9:30. Masks are required and there will be a temperature check to enter. Communion will also be conducted with strict protocols on the first Sunday of each month. Virtual Worship Service will continue to be posted live on our Facebook Page at 11:00 a.m. at pilgrimrestamez. (Click here for details)

In-person Worship Service is held each Sunday morning at 11:00. Sunday school is held at 9:30. Masks are required and there will be a temperature check to enter. Communion will also be conducted with strict protocols on the first Sunday of each month. Virtual Worship Service will continue to be posted live on our Facebook Page at 11:00 a.m. at pilgrimrestamez. (Click here for details) 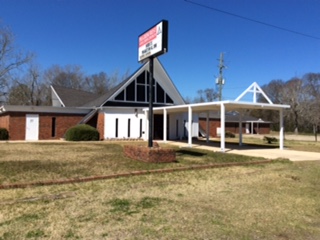 From its inception in the late 1800s, families and friends of Pilgrim Rest African Methodist Episcopal Zion Church worked untiringly to create an edifice that could proudly be called home. In a place called Rushingville on the Simpson Estates in Whistler, Alabama, a few men and women, who many were former slaves, gathered under a brush arbor to worship God. These gatherings led to the establishment of what is now known as Pilgrim Rest African Methodist Episcopal Zion Church. They worshipped under this brush arbor until property was purchased near the center of the community of Whistler. According to deeds recorded in the Mobile County Courthouse, the property was purchased from the Mobile and Ohio Railroad Company on July 22, 1884. The names of the trustees on the deeds are James Hendricks, Robert Holmes, Sandy Payton, Dave Penson and Willis Simpson.

The first church edifice was erected on the property where the current educational complex and parking lot now sit. The building faced the Mobile and Ohio Railroad tracks. The structure, however, was destroyed by a storm in 1914. It was rebuilt in 1916 in the same location, but facing a different direction, which is now North Greer Avenue. Many years later, because of the need to improve and maintain the facility for their use as well as for future generations, several male members decided to brick veneer the building.

The motivation that brought about the establishment of Pilgrim Rest began during the A.M.E. Zion Church conference held at State Street A.M.E. Zion Church in Mobile. Several ministers and missionaries were sent out into various communities spreading the gospel and organizing churches after that conference, and their mission reached all the way to Whistler, Alabama.

For the last 130 years, all ages of worshippers have attended Pilgrim Rest. Even now, the sixth, along with many of the third, fourth and fifth generations are still active at the church. Throughout the many years of Pilgrim Rest’s existence, the members have always been determined, not only to improve
upon their church, but also to cultivate their love for Jesus Christ as well as for one another.

On October 10, 1956, the membership purchased the Gordon property, which was located next door to the old building at the time. It is where the new church edifice now sits. With necessary improvements over the years, it remained the building where its members worshipped. But then during the 1973-1974 conference year, a building fund was officially implemented. The Reverend J.B. Kelly was the pastor at the time.

During the 1974-1975 conference year, the Reverend Paul Whiteurs was appointed as pastor of Pilgrim Rest. Under his leadership, the idea of a new church building was launched. Reverend Whiteurswas appointed the architect and superintendent of this venture. Several members made significant
contributions to the construction of the new edifice.

However, before the completion of the new building, Hurricane Frederick, which made landfall on September 12, 1979, severely damaged the old edifice. After rendering the building unsafe, Reverend Whiteurs advised the congregation that it would be best to use the new edifice, which was still under
construction at the time, while the old building was being repaired. Although the old edifice was later repaired, it was never used for regular services again. Through the cooperative efforts of the pastor and members, the new church building, which is the current building where worship service is held, was erected without a mortgage.

In the fall of 1980, prior to the completion of the new church building, the Reverend Malone Smith, Jr., was assigned to Pilgrim Rest. The new edifice had been in use for several years before it was dedicated on July 24, 1983. Also, under the leadership of Reverend Smith, and the efforts of the trustees and members, a mortgage was secured for the construction of a new educational/fellowship complex. The old church building was then demolished and the area was used to erect the structure that included a parking lot. The new complex was completed in time for use during the 1994 West Alabama Conference, hosted by Pilgrim Rest. A few months later, on March 26, 1995, the educational/fellowship complex was dedicated. Much later, in October 1998, Pilgrim Rest again hosted the West Alabama Conference.

During the 2005-2006 conference year, Pilgrim Rest welcomed its next pastor, the Reverend Dr. E. Eugene Parker and First Lady, Sylvia. Under Reverend Parker’s leadership, many of Pilgrim Rest’s needs as well as desires were realized. Working alongside of the Board of Trustees, much effort to repair heavy damages created by hurricanes Ivan and Katrina took place during his tenure, which included a new roof on both the church edifice and the educational/fellowship complex. A parsonage was also purchased in a Mobile neighborhood by the members during his pastoral, which is where he and his wife resided until 2013.

During the 2013-2014 conference year, Pilgrim Rest welcomed its new pastor, the Reverend C.Vincent Parker and First Lady, Melanie, and their children. Reverend Parker has continued the advancement and growth of the church and believes strongly in the building up of people.